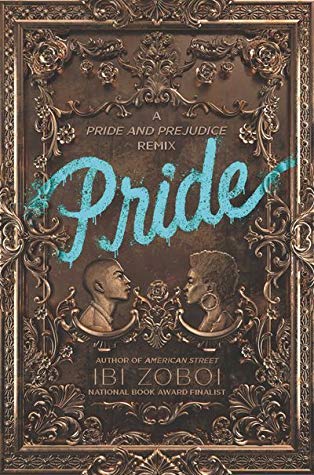 Pride is Ibi Zoboi’s contemporary take on Jane Austen’s Pride and Prejudice, and while it does hit all the familiar beats of its inspiration, Pride transforms them to tell a story that’s completely its own.

Unlike most Pride and Prejudice adaptations, the main focus of Pride is not the love story between the Elizabeth and Darcy figures (Zuri and Darius in this case), but the love story between Zuri and her neighborhood. Sure, the budding romance is there, but Pride is less about its two leads overcoming their pride and prejudices to grow closer to each other and more about it’s female lead acknowledging and facing those same obstacles as part of the struggle of growing up, which feels more appropriate and honest for a modern teenager.

Zuri Benitez, our would-be Elizabeth Bennett, is fueled by her fierce love for her close-knit Bushwick (not just Brooklyn) neighborhood. She’s proud of where she comes from and how it’s shaped her, and it’s the source of her initial prejudice when Darius Darcy and his wealthy family moves in across the street, bringing with them the looming threat of gentrification. To make matters worse, Darius’s older brother, Ainsley, has captured the attention of Zuri’s sister Janae, who was supposed to be enjoying her summer home from college with Zuri.

Though I did enjoy it, I do feel like the book moved just a little too quickly. On the plus side, this meant the plot didn’t drag, but with the setting being such a vivid character itself, it would have been nice to see more of the people within it, especially secondary characters, like Charlise, Colin, and Carrie, explored in such detail and depth.

All in all, I give Pride 3.5 stars, and I think both Austen-fans and neophytes will find something to enjoy in it.