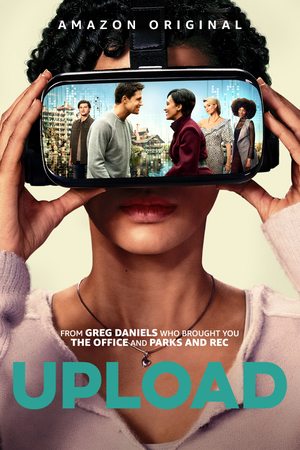 On May 1st, Amazon Prime debuted its latest series, Upload. Consisting of 10 roughly half-hour episodes, I binged the first season in one evening and my only regret is that I now have to wait who knows how long for season two to come out.

The trailer played this show up as a comedy from Greg Daniels, one of the minds behind The Office and Parks and Rec., so I went in expecting a pretty similar goofy-type show with mostly self-contained stories in each episode. Upload does have some of that goofiness, but it also has a mystery that I was not expecting, and it’s driven by a much stronger over-arcing plot.

Set in the year 2033, Upload takes place in a future where people can digitally preserve their consciousnesses—assuming they can afford it—in one of several corporately owned “heavens” (Horizen, Disney Eternal, and Panera Aeon just to name a few). Technology has taken over this future, with L.A. gridlock now navigated by self-driving cars, most food coming from 3-D printers, and virtual reality driving both communication & entertainment.

In the midst of all this, a young hotshot coder, Nathan Brown (Robbie Amell) is working with his best friend to create a free upload option where anyone can design their own afterlife, regardless of economic status. Unfortunately, Nathan’s self-driving car crashes & his girlfriend Ingrid (Allegra Edwards) pressures him to upload rather than risk dying on the operating table—it’s no trouble since she comes from a wealthy “Horizen family” with “data on both sides”. As Nathan discovers, however, Lakeview Horizen might be nice, but it’s no heaven, abounding with in-app purchases, pop-up ads, and an AI with no concept of personal space. To make matters worse, Nathan and his “angel,” or customer service rep, Nora (Andy Allo), realize that someone has corrupted some of Nathan’s memories, someone who may have been behind his so-called accident. As Nora helps Nathan adjust to Lakeview and investigate his death, the two grow closer and quickly develop a complicated relationship.

For me, the story is what kept me hitting “watch next episode.” I wanted to see what happened next with both Nathan & Nora’s growing connection, as well as find out the truth behind Nathan’s death. I was also surprised by how smart this show is. It manages to present some complex ethical and philosophical questions in regards to how technology and money can both empower and entrap us, but it never hits the viewer over the head with those issues or makes you think too hard about them if you don’t want to. As for the humor, like Daniels’ other shows, quirky characters abound, creating a strong supporting cast and ample opportunity for jokes. There are also clever nods that help indicate how our present became their future, some for more practical worldbuilding purposes, others that are just for fun, like the name drop of “Sir Justin Bieber.”

My few complaints are that the sex jokes seemed overdone, and the nudity, though not frequent, was generally unnecessary & weird. There were also a few unexpected moments of light gore, which weren’t especially bad, they just didn’t seem to totally gel with the type of show Upload is, and I think that’s what put me off about them more than anything. So, be prepared for that, but otherwise, I recommend adding Upload to your watchlist because it’s a clever, funny mystery with an upbeat feel.