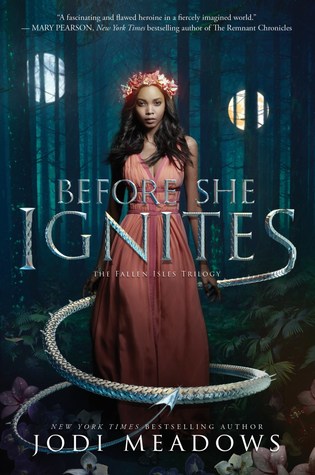 Before She Ignites by Jodi Meadows is a promising start to what looks to be a strong fantasy trilogy involving political intrigue, mystical powers, and dragons.

The world-building is well done; the Fallen Isles aren’t so foreign that we need lengthy explanations to understand how life works there (dragons are an exotic but normal species, noorestone is the mined and somewhat mystical power source), but the religious and political history is very specific and clearly going to play an increasingly important role in the series. The one thing that felt missing was a world map to better grasp the logistics of the novel, but it didn’t exactly harm the reading experience to be without one.

The Fallen Isles are comprised of six island-nations, each named for the gods that fell to their world, called Noore, creating the islands: Anahera, Bopha, Damyan & Darina (technically two very close islands, often referred to by the combined name of Damina), Harta, Idris, and Khulan. Each island has its own culture, and its people a special, sometimes magical-like, ability centered around the role of their respective god.

Before the events of the book, the islands were in conflict with one another, but created and signed a treaty, allying themselves in face of the looming threat of the Algotti Empire growing on the mainland, many, many miles away. The agreement was called the Mira Treaty, named for the daughter of its author who was born the same day, and who just happens to be our protagonist.

Now seventeen, Mira has grown-up as the symbol of all the treaty represents: unity and equality across the islands, and the protection and care of the “children of the gods” a.k.a dragons. She has never known a world without the treaty, and believes in it and the government it created without question, often allowing herself to be their mouthpiece. All of that changes, however, when the government she trusts imprisons her after she uncovers a plot to smuggle dragons out of the islands to the Empire.

The book begins with the Mira Treaty itself, establishing a firm foundation for the novel’s setting, and a brief “before” passage detailing the last normal morning of Mira’s life. After that, the first chapter jumps ahead two weeks to Mira’s arrival in prison, which threw me at first because I was expecting a more chronological story and was worried I was being deprived of important plot details. The second chapter put my fears to rest, jumping back nine days to the aftermath of Mira’s sentencing, and establishing that there would be flashbacks to fill in the gaps. I wasn’t sure if I liked that at first, but as the story progressed I could feel how it helped with the pacing; so much of the story is spent with Mira simply trying to get her bearings and survive in prison, it was nice to break that up with at least a change of scenery, if not more action.

As a character, I didn’t love Mira at the beginning, but her growth, development, and uncertainty as her eyes were opened to how her world really works was very believable to me, and I was rooting for her. It’s not that she’s unlikable to start with, she’s just lived a very sheltered life, and is a little naive and helpless because of it. For example, one of her first complaints in prison is realizing she has a pimple—her first pimple, no less. To her credit, she acknowledges that’s a stupid concern, but it emphasizes just how out of her depth she is. Adding to that is her relationship with her mother, who is disapproving in not only every flashback she appears in, but every time Mira even imagines her, explaining why Mira believes her only worth is in her pretty face, no matter what she does. She does make an effort though, doing what she can to make allies and build up the physical and mental strength necessary to survive, which would be difficult for anyone, but is further complicated by her severe anxiety and compulsive counting.

The other characters aren’t without personality, but they are less developed, which will hopefully be remedied in the next book. I can forgive that for now given that Mira could barely communicate with most of them for the majority of this book. I’m also curious to see if Altan, Mira’s cruel jailer, becomes an increasingly prominent antagonist or if he’ll somehow slide into the role of antihero, because while his methods are terrible, his goal of rescuing the dragons isn’t entirely unaligned with Mira’s. He’ll definitely have some redeeming to do if it’s going to be the latter path, but I find those stories are often the most interesting.

All in all, I give Before She Ignites 3.5 out of 5 stars, but I might go a little higher if the sequel can successfully build on everything it set up.

One thought on “Review: Before She Ignites”