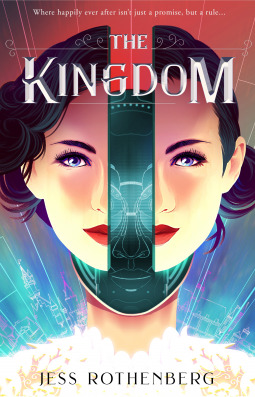 What if Disney World decided to take a cue from WestWorld?

This is essentially the jumping-off point for Jess Rothenberg’s The Kingdom. The titular Kingdom is an immersive fantasy theme park where guests can go on virtual reality adventures, explore meticulously constructed settings ranging from snowy peaks to safari grasslands to the outer reaches of space, and see genetically engineered android-hybrid versions of animals both extinct and existing, as well as creatures of the Kingdom’s own invention. But the Kingdom is most famously home to the Fantasists; seven android-hybrid princesses beautiful and sweet enough to have stepped right off the page of a fairy tale, there to welcome the guests and make their dreams come true.

What could possibly go wrong?

Well, when one of the park employees, Owen, goes missing and is presumed dead, one of the Fantasists, Ana, becomes the prime suspect, bringing to light just how much is wrong with the Kingdom.

This premise was enough to hook me from the start, but the way Rothenberg presents the story is also intriguing. Most of the book is told from Ana’s POV, beginning two years before her trial for Owen’s murder, but these chapters are interspersed with transcripts of surveillance videos, courtroom testimony, pre-trial and post-trial interviews, and other documentation. This was a different but effectively compelling storytelling technique. It really kept me torn between rooting for Ana as her awareness developed and fearing what was coming as I put together the provided evidence.

As fantastic as the premise was, though, I couldn’t help but feel like there could have been more to the book. Pacing wise, it was an adrenaline rush read, gathering speed with each chapter until it’s hurtling toward the end. This is both a good thing and a bad thing. On the one hand, it kept me turning pages because I had to find out what happened next, but on the other, I fear some deeper character and world exploration may have been sacrificed to keep the story lean enough to move so quickly. Ana is a solidly developed character and her progression is fascinating, but I would have liked to have spent more time with the other Fantasists, especially Eve and Nia. Owen also fell a little flat, as the most distinguishing detail about him seemed to be his connection to Ana.

At first, I also thought the pacing rushed the ending, but on further reflection, I don’t think that’s what threw me. There’s some information about the world of the story revealed in the final pages that felt out of place. It’s not unimportant information, but at that point in the story, when things are moving so quickly, the information feels at best extraneous, at worst like the story wasn’t totally resolved. I don’t know if this was intended to leave the door open to a potential sequel, but regardless I think it could have been worked in earlier without interrupting the flow quite so much.

Despite that, I recommend The Kingdom. As I said before, it’s an adrenaline rush to figure out the mystery of what happened to Owen, and the premise is soooo intriguing. All in all, I give it 3.5 stars.