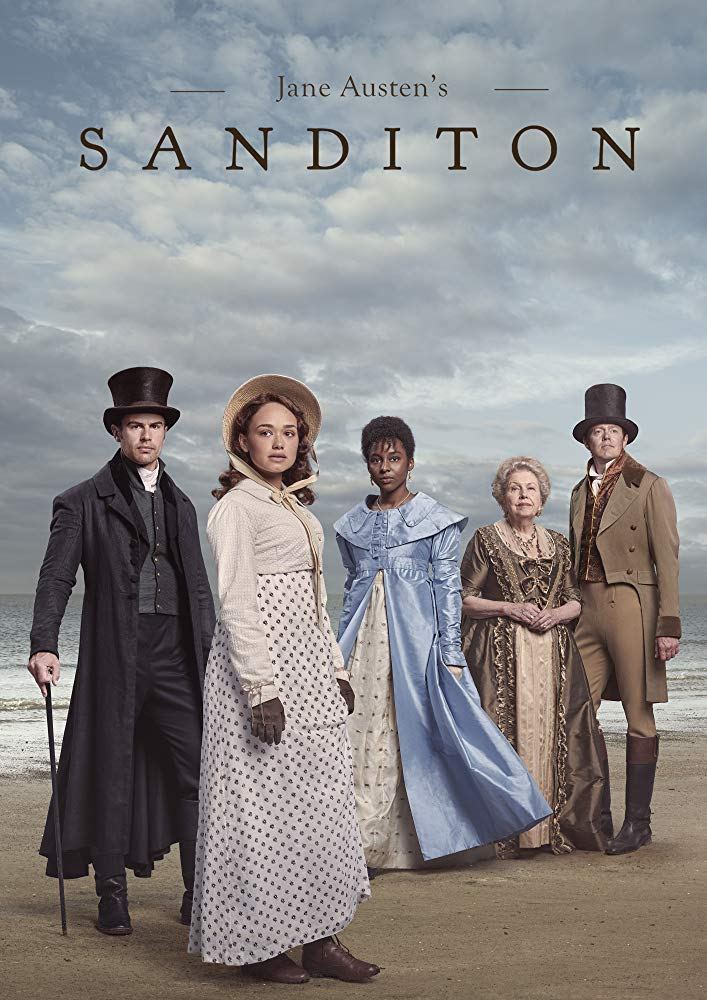 Sanditon just finished its run on PBS Masterpiece last Sunday and, while it wasn’t perfect, I did enjoy it, and I hope to see it get picked up for a second season, though I hear that’s unlikely at this point. The series has received mixed reviews so far, from those both praising its “progressive” take on Austen and those deriding its “anachronistic” style. Personally, I find both takes to be extreme—Sanditon is no groundbreaking classic, but it’s perfectly acceptable entertainment.

The two major faults I found with this series were first, its reliance on being called an Austen “adaptation,” and second, the fact that for the most part, the subplots were more interesting than the storyline of the main couple, Charlotte and Sidney.

For the first complaint, it’s really more a matter of marketing than anything to do with the story itself. I think it would have better served the show to say it was a series by Andrew Davies “inspired by” Jane Austen’s unfinished novel because honestly, that’s what it was. Austen only completed twelve chapters of Sanditon before her death, and it’s estimated that likely would have been only about 1/5 of the finished version. In terms of story structure, it’s not even a complete first act, and in terms of actual reading, it’s not even enough pages to properly introduce every character. For example, we never meet Georgiana Lambe face to face in the book; she is only referenced by other characters as a Miss Lambe, “about seventeen, half mulatto,” (Chapter 11) and “a young West Indian of large fortune in delicate health” (Chapter 10). We don’t even know her first name—Georgiana must’ve been a choice by Davies (probably in reference to Pride & Prejudice), along with her connection as Sidney Parker’s ward, and everything about her personality.

“Inspired by” versus “adaptation” might seem like a small distinction, but with so little to go on, to say this series is an Austen “adaptation” sets up difficult to meet expectations in terms of style, subject matter, and plot, and die-hard fans of hers are likely to be pretty nit-picky, so it’s no surprise that there have been some strong negative reactions that this so clearly has Davies’ fingerprints all over it, not Austen’s. To have been up-front that it was his creation inspired by Austen’s I think would have kept more people open to the soapier, more modern style of the show.

If you’d like to read the chapters and compare them to the show yourself, you can find Sanditon on Project Gutenberg (Australia).

As to my second complaint, there is no good excuse for underserving your main characters. Charlotte Heywood (Rose Williams) has elements of Elizabeth Bennett, Catherine Moreland, and Emma Woodhouse, but unfortunately, none of those traits are expressed as compellingly as they were in their original heroines. Charlotte is likable, but she comes across as rather bland because she has no clear overarching goal or desire. Whereas Elizabeth wanted to live on her own terms, Catherine wanted an adventure out of one of her novels, and Emma wanted to conduct the lives of her friends, Charlotte is mostly along for the ride at Sanditon; she’s less of a dynamic character and more of a reactive one. And while her love interest, Sidney Parker (Theo James), seems to have more depth to him and at least has the overarching goal of taking care of his family (ward Georgiana included, whether she likes it or not), we really only get glimpses of that as he is usually placed onscreen to be a Darcy stand-in and challenge Charlotte’s feelings rather than serve his own storyline. It wasn’t until the final episodes, when both characters finally appeared to clearly want something (each other) and realize it, that I started to care about or feel any real chemistry between them.

Esther Denham (Charlotte Spencer), by contrast, is a character whose storyline interested me more and more with each episode because it had clear focus and direction. She was a little over the top at first, what with the heavy-handed attempts at conveying the “steaminess” between her and step-brother Edward (Jack Fox) as well as her defensive attitude, but she was quickly revealed to be a complex character torn between bitter practicality and carefully guarded hope. And Lord Babington (Mark Stanley) was an easy love interest to root for once we got to see the two of them banter, with his easy match for her cynical wit and obvious admiration and respect for her sensibilities (I will admit I cheered after he delivered his final proposal). And even though their storyline was more complete than most of the other characters’ by the end, I think Esther’s parallels with Lady Denham are something that could be explored in further seasons with interesting results.

Other compelling characters worth noting:

Leo Suter as “Young” James Stringer. I cared about his feelings for Charlotte way before I cared about Charlotte and Sidney’s feelings for each other (“I wouldn’t wish for you to change. Not for the world.” Heart-eyes emoji, anyone?) Also, I absolutely called his entire plotline in the final episode, and I’m sad to say I was right. Poor Young Stringer.

Anne Reid as Lady Denham might be my favorite example of the snooty old Austen-type grandam. She’s a little miserly, a little mercenary, but not out of cruelty—she’s just that blunt and too rich for anybody to call her out on it. Her way is the right way and she is determined to have the final word.

Turlough Convery as Arthur Parker. He played Tom Harry in Poldark, a character who was the absolute worst, so imagine my surprise when he provided much of the comic relief in Sanditon! Though inclined to hypochondria by his sister’s influence, Arthur Parker is a generally jolly man who enjoys simple pleasures like buttered toast, lively dancing, and being infuriatingly encouraging to a determinedly mopey heiress.

Crystal Clarke as Georgiana Lambe. In her first episode, she played opposite much of the gentry of Sanditon with great results, sparring with Lady Denham and generally scorning everyone else, but after that, the writers pretty much limited her to scenes with Sidney and Charlotte, which I think was an unfortunate waste.

Overall, would I recommend watching Sanditon? If you’re wanting something on the level of Andrew Davies’ 1995 adaptation of Pride & Prejudice, you’ll probably be a little disappointed. But if you’re simply looking for an entertaining period drama to relax in front of, Sanditon is certainly up to the task.

One thought on “Review: Sanditon”