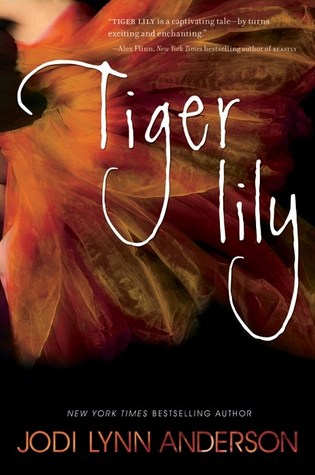 Tiger Lily, by Jodi Lynn Anderson, is a retelling of Peter Pan from Tinkerbell’s point of view, but it centers around the role Tiger Lily played in the story.

In this version, Neverland is an often overlooked and eventually forgotten island lingering on the edge of a British trade route, which more clearly explains the presence of pirates. Those living on the island also age, unlike in the original, but only to a point. Some people stop aging as teenagers, while others develop gray hair and wrinkles before they stop, but no matter the case, aging is unrelated to death. In fact, those in Tiger Lily’s village are frightened by the fact that their English visitors’ bodies decay and give out over time. This helps explain why some of the natives appear older on an island where no one is supposed to grow up.

The trouble starts when Tiger Lily rescues an English castaway against the wishes of her people, who are afraid he might give them the “aging disease.” She’s always been an outsider among her people, but this is one step too far, and her adoptive father, Tik Tok, promises her to an unpleasant, oafish man in an effort to appease the villagers and curb Tiger Lily’s wild ways. Tiger Lily continues caring for the “Englisher” as an excuse to stay out of the village, and her path soon crosses with that of Captain Hook and Smee, and eventually, Peter Pan himself.

Fair warning, there is a romance that develops between Tiger Lily and Peter, which is later complicated by Wendy. I didn’t mind it, however, because even though the feelings are very sincere and real, the way they each behave is still very youthful and immature, almost as though they are playacting at how they think a couple ought to be, which is pretty in line with the source material.

What this book does really well is set just the right tone and mood. It’s wistful and dreamy and thoughtful, carefully drawing out the darker aspects of childhood tale we all know without abandoning its whimsy altogether (though I don’t understand taking away Peter and the Lost Boys’ ability to fly. The island has fairies and people stop aging, but flying with fairy dust is a too much to believe?). While the details are a little different, the story sticks to the major plot points of Peter Pan. The characters also feel in line with their original versions, though you may feel differently about some of them (Wendy especially) after viewing them from this perspective.

I was skeptical at first of the decision to make Tinkerbell the narrator, but it worked pretty well for the most part. As a fairy, she’s an observer of the humans on the island, unable to clearly communicate with them and too small to really participate in their activities. Because of her species’ lack of verbal communication, she’s explained to be highly intuitive, empathetic, and observant, all of which are helpful skills in a narrator. However, her intuition seems a little too powerful sometimes, making the POV feel like it was slipping into third-person every so often instead of first, but other than those moments, I actually liked Tinkerbell’s perspective.

All in all I give Tiger Lily 2.75 out of 5 stars. It’s not my favorite, but it still tells a compelling story.